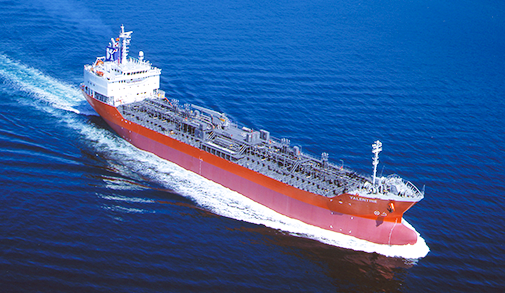 From Domestic Product Tanker Operator
Koyo Kaiun is an independent and widely known shipping company in Japan established in 1949. Oil was emerging and replacing coal as the major energy source in those days, and the company aspired to be an independent domestic coastal tanker operator. During the rapid economic expansion of 1960's and 1970's the company had grown to be among the top domestic coastal tanker operators.
However, following the Japan's so-called ""lost decade"" Koyo Kaiun shut down its domestic coastal tanker division in March 2009. This has allowed it to concentrate its resources to growing international chemical tanker business, which it launched in 1966.

To International Chemical Tanker Operator
In 1966 Koyo Kaiun sent some of its coastal tankers abroad for the first time to carry lubricating oils from Japan to Taiwan and molasses on the way back. The decision to send its coastal tankers abroad was an attempt to solve a long-standing problem of coping with a seasonal slump in demand for the coastal tankers in summer. In 1969, the company began near sea chemical trades, expanding its trading area gradually. In 1974, vegetable oils were added to the list of cargoes the company handled, and the chemical tanker fleet, dedicated to international transportation, was created.
In 1996, Koyo Kaiun Asia Pte Ltd was established as a wholly owned subsidiary in Singapore to cater to the growing needs for chemical tanker services within South East Asia. From 1996 till 2010 Koyo Kaiun had two fleets; Tokyo fleet for Far East – South East Asia trade and Singapore fleet for Intra South East Asia trade.
In 2010, Koyo Kaiun Asia launched a new trans-Pacific service, linking Asia and North America. The decision was an answer to its customers that needed more punctual service in the trade lane. In November of that year, Koyo Kaiun USA was established in Houston, Texas for chartering purpose.
Since 2015, Koyo Kaiun Co., Ltd. (Tokyo) has overtaken the Asia - North America trade.
Today, Koyo Kaiun focuses on the Intra South East Asia Trade and the Asia - North America Trade.

For business diversification, we are renting two asphalt tanks and factory built on the company’s owned land. Koyo also purchased their own office building in 2010 located in Azabu-Juban,Tokyo and is presently renting office space to other businesses.